You know how I said I checked out a bunch of Middle Grade books to avoid YA for a while? Well, I lied, sort of. I did check out that one YA book, that was decidedly not dystopian or sci-fi.

The Storyteller, by a German author named Antonia Michaelis. 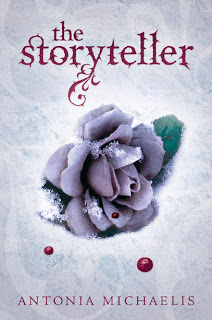 It begins the day Anna finds the child’s doll on the floor of the student lounge. When it’s claimed by Abel, the school drug dealer, Anna becomes determined to learn more about this mysterious boy with the military haircut and deep blue eyes. She follows him after school and discovers a secret: Abel is caring for his six year old sister Micha, alone. Anna listens as he tells her a fairy tale , the story of a little orphan queen pursued by hunters across the oceans for the treasure she carries: her pure, diamond heart.

It’s a story with parellels to reality. Social services and Micha’s abusive father could take her from Abel if they discover the truth.

Despite friends’ warnings, Anna is drawn to Abel and Micha, and falls under the spell of the story of the little queen and her desperate voyage.

But when people Abel has woven into his tale turn up dead, it’s Anna whose heart is in danger. Is she in love with a killer? And has she set out on a journey from which there is no return?
Antonia Michaelis has written a spell-binding tale of suspense, danger, and transformative love.
Guys, THIS BOOK.
I don’t even know where to start.
It was a new idea, a combination of fairy tale and dark reality, scarred and edgy to the core, but beautiful and lyrical. Antonia Michaelis truly pulls out a beautiful, original tale and executes it almost flawlessly. I wanted to cry and laugh and cry, but I could only stare on in stone silence, at the simple, haunting cover, and wonder how it could hold so much power in the pages and words. The book caught me, held me, and when I closed the it, I felt that aching, gut-wrenching bittersweet feeling, the hollowness that settled in my heart. It was not fangirling or gushing over characters–describing it as that would be almost sacrilege. I felt a deep love and heartbreak in finishing it, and it would only be the utmost appreciation I could ever offer as a reader.
The combination was perfect. Please read it. I love it so much, and hope that you will too.